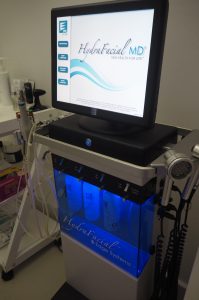 With my 40th birthday fast approaching and skin that’s been feeling dull and tired lately, I was keen to try a medical facial. I was looking for a treatment that would give me obvious and immediate results and the Hydrafacial promised just that.

Before the treatment, there are a lot of forms to complete. Mostly medical history and disclaimers, but the form filling process gives you a real sense that what you are about to have done is very much a medical procedure rather than a relaxing treatment. You are also taken through to have your skin photographed. (I was given a wipe to remove my make-up) Fortunately I didn’t get to see the photograph, I don’t think it would have been a very pretty sight! The photos are for their records, so that they can track your progress if you attend subsequent appointments.

Lenka, my therapist, introduced herself to me and took me through to the treatment room. She asked me to talk her through my skin care regime and any skin concerns that I had. I told her about all the products I was using, and explained that I felt that my skin was feeling dull and sluggish. I had been feeling  like I was diligently sticking to a skincare routine, but not seeing any real results. Lenka explained that for any products to work effectively, they needed to be able to penetrate the skin. However, if my  skin was blocked with dead cells, SPF, make-up and pollution, then the products wouldn’t be able to do their job. The Hydrafacial is a deep cleansing exfoliation treatment which extracts the impurities and hydrates your skin with a cocktail of skin-boosting vitamins and Hyaluronic Acid using the mesogun. 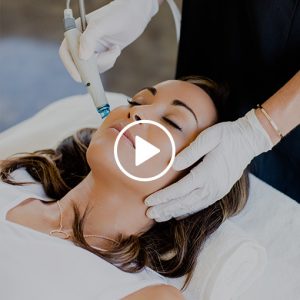 The treatment uses a 5 step Vortex – Fusion serum delivery system. Say what?! Basically, it extracts the impurities while replenishing your skin with loads of good stuff.  The sensations that I experienced were a kind of ‘scraping’ and ‘vacuuming’ of my skin. If you have ever had microdermabrasion you will know what I mean by ‘scraping’. I imagined a little Henry Hoover running over my skin sucking out all the gunk that was sitting in my pores whilst simultaneously squirting in a whole load of vitamins and anti-ageing serums into my pores with a little hose. It was not at all painful, in parts ticklish (especially under my neck) and altogether strangely satisfying.

Once all of the cleansing, extracting and serum infusion was finished, Lenka explained that she was going to put on an LED light that would allow the products to really penetrate the skin and calm the redness. She warned me that the light would be bright and that my eyes would take about a minute to adjust. My eyes were covered with pads, but Oh. My. Goodness, it was bright. For a minute I thought I would never be able to see again! I took some really deep breaths and concentrated on keeping my eyes firmly shut. Lenka reassured me that my eyes were safe and that it would get better. It did, and after about a minute, she brought the machine closer. The lights got even brighter and felt warm. I imagined myself by the pool back in Greece with the warm sunshine against my skin and felt calm again. I think the lights stayed on for about 10 or 20 minutes. I was given a wonderful arm and hand exfoliation and massage, so those minutes really whizzed by. When the lights were turned off, I experienced what felt like a galactic explosion of stars against a deep blue sky. Quite extra-ordinary!  *This Dermalux LED is a ‘bolt-on’ – an optional extra which you pay for.*

Once the treatment was over, Lenka passed me a mirror so that I could have a good look at my skin. I was expecting to be very red and blotchy, but was pleasantly surprised. It wasn’t too bad at all. I took a quick snap immediately after the treatment, which I am rather nervously sharing with you. Skin damage, wonky eyebrows and all. Unfortunately what you can’t see in this photo, is how much clearer and more radiant my skin looked. I decided not to put any make-up on afterwards, to give the products the best chance of working their magic. 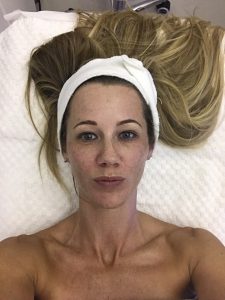 Immediately after the facial.

Then Lenka showed me what had come out of my skin. So disgusting, but also SO satisfying! (Scroll over the next photo if you are squeamish…) 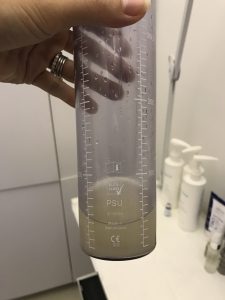 Before my treatment I had told Lenka that I was thinking about having laser treatment on my dark pigmentation patches. However, after my treatment she explained that the sun damage was too bad and too deep for this to be effective. I was so disappointed to hear this, because since the age of 21 I have been so careful not to put my face in the sun and have religiously applied my SPF. Lenka was not surprised to hear that I had grown up in South Africa and explained that all the damage had been done by the time I moved to the UK at 21. Thanks mum and dad!

So how best to treat the sun damage?

Lenka advised that the best result would be achieved by going on a prescribed course of Obagi. This would involve seeing a doctor and using Obagi products for 3 months. The cost of the products was £500, which when compared to the cost of laser treatment, didn’t seem too bad, but the side effects could be quite severe. I would probably experience a lot of redness and peeling. This isn’t something I feel I could endure, so instead I am trying a stronger Vitamin C treatment and upping the Retinol. I will also definitely return for another Hydrafacial in time. I am so impressed with the result. My skin is noticeably clearer and has much more of a glow.

Now I know why they call it the ‘Red Carpet Facial’. It’s quick and the results are immediate with no recovery time and no irritation, meaning you can walk out, have your make-up done and strut your stuff down the red carpet hours later. Or if you’re me, you can go home and mop the kitchen floor…:-)

Hydrafacial Prices start at £145. You can read more about the procedures Medicetics has to offer here.

As always, thanks for reading.

4 responses to “My Hydrafacial with Medicetics”